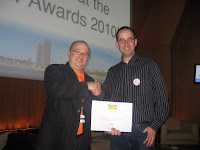 The community award is decided upon by a vote of the dozens of MobileMonday chapters present at the event, and this means that fring got the most votes from chapter organizers worldwide.

In the early stage category, Babajob from Bangalore took both the jury and community awards, and Orbster from Munich took the audience awards.

In the picture: Ofir Leitner, founder of MoMoTLV gives the award to Neal Fullman, International Communications Director at fring.
Posted by Ofir Leitner at 11:15 AM

Join us on June.12 to the biggest mobile event in Israel!

If you want to make an impact in the Israeli mobile ecosystem, and join the multitude of industry players that sponsored our events in the past - let us know!

If you are a mobile enthusiast join us on our MoMoTLV Facebook group through which we send event invitations and on MoMoTLV Google Group, our discussion board to which you can subscribe by entering your email address below:


Want to gain positive exposure within the Israeli mobile community? We are always looking for companies with a broad vision to join the family of our sponsors.

To get info on sponsorship packages contact ofir at momotlv dot com.