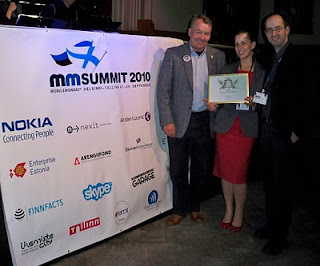 We are glad to announce that the Israeli candidate for the MobileMonday Summit Peer Awards 2010 in Helsinki has grabbed the first place in the Future Potential Category!
The startup, Ringbow, was presented tonight (27/9) in Helsinki by Co-Founder Efrat Barit, and has gained the most votes from a jury composed of industry experts and MobileMonday founders from across the globe. Ringbow competed with 5 other startups who were sent by other MoMo chapters.
Ringbow is a ring device that enhances the way we interact with finger based interfaces such as touch screens, hand-gestures recognition and augmented reality. It is an interaction tool that provides a set of innovative means of controlling any touch sensing platform.
Ringbow's win makes it the third in a row win for Israeli startups sent by MoMoTLV to Peer Awards contests in Barcelona and Helsinki.
Congrats to the team!
Posted by Ofir Leitner at 9:33 PM

Join us on June.12 to the biggest mobile event in Israel!

If you want to make an impact in the Israeli mobile ecosystem, and join the multitude of industry players that sponsored our events in the past - let us know!

If you are a mobile enthusiast join us on our MoMoTLV Facebook group through which we send event invitations and on MoMoTLV Google Group, our discussion board to which you can subscribe by entering your email address below:


Want to gain positive exposure within the Israeli mobile community? We are always looking for companies with a broad vision to join the family of our sponsors.

To get info on sponsorship packages contact ofir at momotlv dot com.